“That your faith should not be according to the wisdom of man, but by the power of God.” I Cor. 2:5 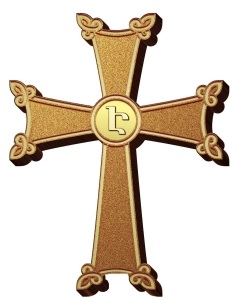 CONFESSION OF FAITH OF THE ARMENIAN APOSTOLIC ORTHODOX CHURCH

Above and before all things, we believe in the All-Holy Trinity, the Father, Son and Holy Spirit and one Godhead, which is the one and perfect good, ineffable essence, timeless existence, and unchangeable quintessence, creator and life-giver of all things visible and invisible. One is the nature of the All-Holy Trinity, one dominion, one kingdom, and one will, inseparable and incomprehensibly abundant in Three Divine Persons.

Full and perfect is He, “who fills all and is in all” (Eph. 1:23), and He lacks nothing, who is not renewed and does not age old and does not wax and wane, who is always the same in His plenitude and infinity. And in the Triune Godhead's incomprehensible infinite, boundless, and completely perfect nature, there is nothing alien or additional.

The Father is the timeless cause of the Son by birth and of the Holy Spirit by procession. However, in the All-Holy Trinity there is neither greater nor lesser, lower nor higher, but rather one indivisible Godhead and Power, Three Persons in coequally glorified, honored and unconfused unity, without advantage, superiority or subordination. From all sides as a heavenly beautiful oneness and an infinite habitation of the greatness of the Three infinities: Each one in Himself, as the Father and Son and Holy Spirit, each with His own identity.

There is no other Creator, except only the All-Holy Trinity and the Almighty Dominion, which with its all-good will, creative power, and incomprehensible wisdom made all the visible and invisible creatures out of nothing, from non-existence. Who sits in the heaven of heavens and cares for all creatures, with providential knowledge and with infinite wisdom provides for the heavenly and the earthly, is life and the giver of life to everyone and in all things infinite, incomprehensible, ineffable.

Who made man in His image and likeness, as the crowning glory of all creation, granting him the perfect beatitude of being with Him, sharing and partaking in His ineffable mysteries. Who did not deprive mankind, who strayed from Him by disobeying His commandment, of His creative care, did not abandon mankind in the shadow of death and in the travails of earthly life, promising to save man and free him from the realm of sin and death. 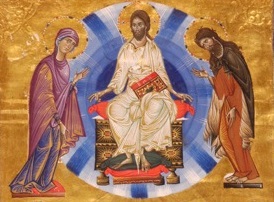 In the fullness of time, God opened the doors of His incomparable love and boundless mercy and caused His light of salvation to dawn in this fallen world. One of the Holy Trinity, the Only Begotten Son of God, the Word before eternity, for our salvation humbled Himself from His unreachable Divinity and through the Holy Spirit perfectly became a man by the Holy Virgin Mary. He did not that create the man first, then dwell in him as in a temple, rather He, the Word truly became a man, that is He united in himself a perfect human nature, with mind, soul and body. Neither was the Word exchanged for body, nor the body for Divinity, nor while being united did the divine or human change their nature or become altered or confused, but rather perfect Divinity joined to him flawless humanity, without change, without alteration, without confusion: that is God remained God and man remained man. Two perfections became one perfection, in a new and wondrous union. From the moment of conception, the Divine and Human were inseparably united in one Lord Jesus Christ, and in the salvific economy (divine plan of salvation) of the Word become man starting from the holy Conception, it is not possible to speak of any action as solely divine or solely human. In Christ the unity of the God-man is not a conjoining of natures or linking or relating, but rather an essential, existential and substantial unity, in which it is not possible to introduce any division or separation. The divine and human in person, nature, will and action are indivisibly united in one Lord Jesus Christ. Therefore, one is the person, nature, will and action of the Word of God become man, and any division or duality in our Lord Jesus Christ that might undermine the truth of our salvation is to be rejected. In this unity one should not deny the perfection of each, nor reject on account of the perfection of each that one perfection, but should profess unity in the absence of any alteration and the absence of any alternation in the unity. In other words, Christ has one nature and one countenance (prosopon) not in respect of the sameness of nature or in respect of being one person, for these two concepts together nearly preclude God from becoming man, or man from becoming god, but in respect of the ineffable unity of the Word in His body. It is not possible by any worldly example to understand, describe or explain the boundless mystery of God's manhood, which is a mystery of faith and a dogmatic truth; therefore, avoiding the offence of attempting to with the human mind the incarnation of the Word, we believe that God the Word became man for the salvation of alienated mankind in a way that cannot be expressed and is beyond our understanding, and beyond the reach of our minds, that only He can comprehend.

He who is consubstantial with the Father in his Divinity, became consubstantial with us in our humanity, became a true and perfect man, in all things like us, except for sin. Christ bore, as part of the divine plan of salvation (economy of salvation), all human weaknesses, voluntarily bearing our human passions, condemning in them the yeast of sin and freeing us from the condemnation of sin. Consequently works of economy are not only the miracles fitting to God – walking on the water, raising the dead, multiplying loaves, ect. – but also human frailties- thirst, fatigue, weeping, ect. When the Lord performed a divine miracle, he performed it asGod and man, so that human might likewise become a participant in those Divine works. And when He bore human weaknesses, He went through them not as one condemned, like ordinary mortals, but rather as God and man, with a liberating strength, and freed us from the bonds of evil. Every moment of Christ's life on earth, beginning from the Holy Conception through the glorious and miraculous Resurrection, is the economy of salvation and is not accidental.

Christ willingly, without being corrupted, and without being forced or compelled by nature, experienced all the innocent or irreproachable human passions. The Word God did not take the nature of Adam as originally created, but our fallen nature, our corrupted body and our sinful soul and mind, and uniting them with Him, He separated corruption from the body and sin from the soul and mind. Therefore we confess that the Lord's body is incorruptible, not by nature, but by this ineffable union. Likewise, we confess that Christ's body was by nature subject to suffering and mortality, however, because of the economy of union, it was not subject to suffering and was immortal.

We confess that Christ, the New Adam, came into the world, so that He might give life to all and renew mankind which through the old Adam had been condemned to corruption, sin and death. He, who is uncircumscribed by space and time, by His nature, in His providence and the Father's will entered into the finitude and time of this world, as one from this world, so that He might give life to those who were in this world and so that those ensnared by the deceitful devices of evil through Christ might come to God the Father. "For what the law could not do, in that it was weak through the flesh, God sending his own Son in the likeness of sinful flesh, and for sin, condemned sin in the flesh (Rom. 8:3)." In fulfillment of all this, He, the Apostle and High Priest of our confession, our Lord Jesus Christ, offered Himself as the sacrifice of reconciliation to God the Father, so that by His blood He might redeem all, the living and the dead (Hebr. 9: 14, 28). He, who is Living and Life-Giver, was crucified and tasted death for all, with body united with His Divinity was placed in the tomb, and with soul inseparable from His Divinity descended into Hell, preached to the spirits imprisoned by the evil one, showing the renewal and light of salvation, destroyed hell and freed the spirits. Then on the third day, through His miraculous and glorious resurrection, He became the first-born of the dead.

We believe in the Holy Spirit, consubstantial and co-creator with the Father and Son, Who with uncircumscribable power moved upon the waters and bore life to all creatures, Who spoke in the Law, the Prophets and the Gospels, descended as a dove upon the Jordan, to give glory to His Co- being, miraculously showed forth in the Lord's divine plan for salvation (economy of salvation), was imprinted upon the Apostles by the breath of the Only-Begotten Son, then on the fiftieth day of the Resurrection of the Lord in the form of fiery tongues He descended upon the apostles by His economy and filled the creation, redeemed by the incarnate Word. He preached through the mouths of the apostles, He made the teachers of the Church, brilliant with His divine knowledge and genius, and dwelt in the saints.